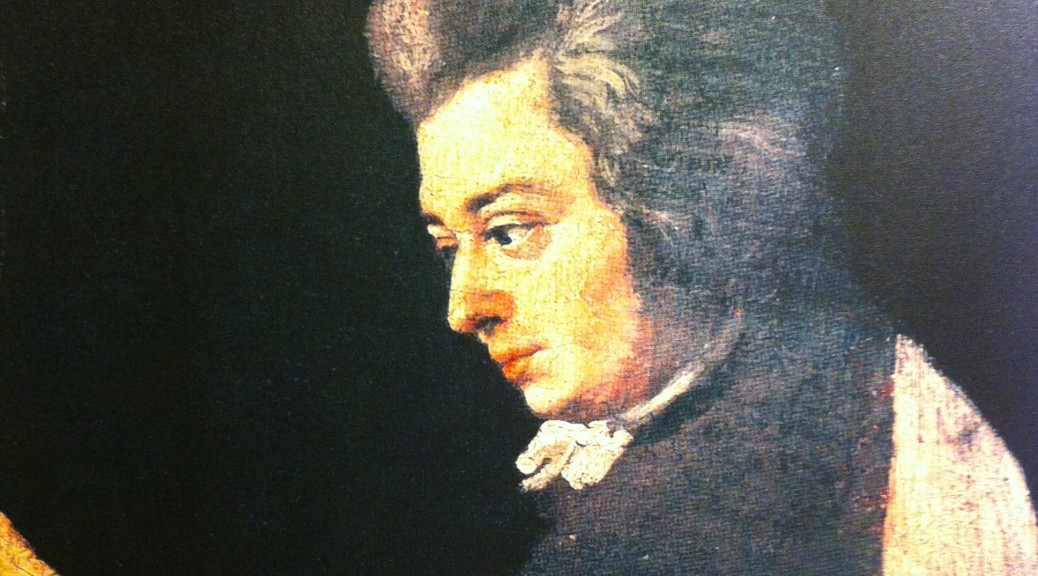 I have recently found myself interested in studying the operas of Mozart more in depth than I have in the past.  I have now heard his operas, “Die Entfuhrung aus dem Serail,” “Le Nozze di Figaro,” “Don Giovanni,” “Cosi fan tutte,” and “Die Zauberflote.”  I have only heard one in its entirety as a live performance – “Die Zauberflote,” in an English language translation performed by a two-piano team playing an orchestral reduction at the college I attended.  In each of these operas, certain specific themes continually resurface, even though Mozart worked with three different librettists between all of these operas – Johann Gottlieb Stephanie (the Younger) for “Die Entfuhrung,” Lorenzo da Ponte for his three great Viennese Italian operas, “Le Nozze di Figaro,” “Don Giovanni,” and “Cosi fan tutte,” and Emanuel Schikaneder for his last German singspiel opera, “Die Zauberflote,” otherwise known in English as “The Magic Flute.”

It is interesting to note this cross-section of his most famous and most performed operas cover both German singspiel (“Die Entfuhrung,” and “Die Zauberflote”), and Italian Opera buffa (comic opera) (“Le Nozze di Figaro,” “Don Giovanni,” and “Cosi fan tutte”), although “Don Giovanni” has sometimes been referred to as an Opera Seria (tragic opera).  In these operas, Mozart demostrates his complete command over the most important operatic styles of his day.  As I said in my post, “There is No “I” in Mozart,” there is not a “personal” element in Mozart’s music the same way it exists in the music of Beethoven and even Haydn to some degree.  However, in just beginning to again revisit opera, having just finished listening to and following the libretto of “Die Entfuhrung aus dem Serail,” I see it is in opera where Mozart most reveals himself to the extent he ever does regarding his personal feelings, beliefs, hopes, fears, and aspirations.  It is in opera where we can perhaps find the key to unlocking the heart of Mozart.

The themes which continually recur in these operatic masterpieces of Mozart are:

I was quite moved as I read some of the concluding words from “Die Entfuhrung,” which shows the strong belief Mozart had in the power of forgiveness and love over revenge and bitterness, which would also come to be the essential message in “Figaro.”

BELMONTE: Yes. Pasha.  Cool your wrath on me. I am prepared for anything.

SELIM:  You are mistaken.  I hold your father in too much detestation ever to be able to tread in his footsteps.  Take your freedom.  Take Constanze, sail home and tell your father that you were in my power and I set you free so that you could tell him it is a far greater pleasure to repay an injustice with a favor than an evil with an evil.

SELIM:  I can believe that.  Go away and at least be more humane than your father.”

If ever we can find a key to the man behind the music, it is here – in the librettos of Mozart’s operas.  It is fascinating it is in the words, and not the music where we encounter Mozart the man, especially since Mozart was not himself the actual librettist persay.  However, we do know from many letters to his father, especially regarding “Idomoneo,” “Die Entfuhrung,” and “Figaro,” Mozart had a definite hand in the shaping of a libretto to suit his needs, musically, dramatically, and otherwise, and most definitely had input in how the libretto ultimately came out.  Music is a an abstract art form, and is at its most subjective in instrumental music, sometimes called “absolute music.”  It can be said to be at its least abstract and subjective in song and opera, because the words tell us what is specifically behind the sound we hear.  While Mozart was obviously sensitive to having his music reflect the words, we again cannot necessarily say it is “personal” in the same way it is for the great Romantic masters of opera – Wagner and Verdi.  Even in his operas, Mozart’s music is never really “personal.” In music, Mozart is never about Mozart.  He is about music, which is why it can be said of Mozart perhaps more than any other composer, he is  music itself.  As quoted from a letter to his father Leopold dated September 26, 1781, “…because the passions, whether violent or not, must never be expressed to the point of causing disgust, and because music, even in the most terrible situation, must never offend the ear but must give pleasure and, hence, always remain music…”  Yet in the words of his opera “Die Entfuhrung,” it is hard to imagine Mozart did not have his own beloved Constanze Weber in mind when the heroine for “Die Entfuhrung” was also named Constanze, whom Belmonte rescues from the harem of Pasha Salim in which she is captured.  Mozart too, in a letter to his sister dated February 13, 1782, while at work on his opera “Die Entfuhrung,” stated his need to “rescue” his Constanze from her overbearing mother, whose company Mozart found most unpleasant… “I then go to see my dear Constanze – where the pleasure of seeing each other is, however, generally spoilt by her mother’s embittered remarks – I’ll explain all this in my next letter to my father – hence my wish to free her and rescue her as soon as possible…”

It is in “Die Entfuhrung” where Mozart is perhaps his most “personal” in a most specific way, even with the heroine named after his own beloved.  His strong association with Freemasonry and its ideals, along with those of the Enlightenment is clearly evident in much of the themes of brotherhood, secrecy, fraternity, and love, as found in the libretto for “Die Zauberflote.”  This may seem more “general” than specific, and we cannot know just how direct these themes were related personally to both Schikaneder and Mozart.  His strong Catholic beliefs in the ultimate damnation of unrepentant sinners is blatantly clear in the moral tale of “Don Giovanni,” whose lack of repentence for his cruel womanizing, as well as the murder of the father of one of his would-be victims Donna Anna leads to his being consigned to the flames of Hell.  But again, it is in the words rather than the music where we see these beliefs, opinions, and feelings of Mozart, which are also corroborated by many invaluable letters, especially those to his father. That is why after his father’s death on May 28, 1787, we lose much potential valuable information regarding the depth of his feelings on his operatic work.

While Mozart does deal in his operas with issues of divisions over class, religion, and gender which were especially relevant to him personally – between the aristocracy and the middle class, religious divisions between Christians and Muslims, as expressed in “Die Entfuhrung,” class divisions as found in “Figaro” and “Don Giovanni,” and tensions and divisive attitudes between men and women as found in “Figaro,” “Don Giovanni,” and “Cosi fan tutte,” he always ultimately shows reconciliation of all of these seeming irreconcilable differences, as long as one is willing to be reasonable – a significant ideal of the Enlightenment Era in which he lived.  The reason the Don is consigned to Hell at the end of “Don Giovanni” is because he refuses to be reasonable, to repent, to own up to his terrible behavior.  It shows, at least metaphorically that a lack of ownership and forgiveness leads to ultimate death and suffering. Being charitable, forgiving, and understanding leads to health and happiness.  It is a moving testament to these timeless truths which can so beautifully emody art, even if they so often allude us in our everyday lives.  As the Baron van Swieten said in “Amadeus,” “Opera is here to ignoble us Mozart.  You and me, just the same as His Majesty.” It is no wonder it is here – in opera, where we can find the key to the heart of Mozart the man.  It is in opera where Mozart reveals himself the most, as it is often said he aspired to writing opera more than anything else, as it embodies everything – a “total art work” as Wagner would later call it – music, drama, costumes, set design… the embodiment of Life Itself on a stage… as Shakespeare is quoted from his play, “As You Like it,”  “All the world’s a stage”….